Week one is finally over! (longest week of my life) I was supposed to start treatment yesterday at noon, but am going with the St. Judes route instead.

Today was a great day. I woke up at 4, my steroids do that to me! I laid in bed for a while, until I could convince myself to get ready for senior pictures, (figures they would be taken the first day my face puffed up!) Then for lunch, some of my siblings and Diane (mom) went and met an awesome friend (Pam) at the cheesecake factory. If I survive this brain cancer I'm eating there EVERY DAY! Things we ordered: (I know I'm going to spell all of this wrong,) Fried mac and cheese, avacado egg rolls, crisp chicken costelletta, southwest egrolls, four cheese pasta, chicken nachos, chocolate tuxedo cheesecake, dulce de leche cheese cake, reeses peanut butter cheese cake, probably more but I forget! I have quite the apetite! It was so good.

We then drove home from Salt Lake, and I took a nap, when I woke up it was time for pre-region cross country! The whole team is SO supportive. My whole team had "Rachel" and "Run for Rachel" written all over their skinny little bodies. Everyone has been so incredible through all this, temper tantrums and all. It was hard to see everyone running except for me, but at the same time it was a blessing because it was blazing hot outside, and I hate pre-race nerves! And also after I was told I was most people's inspiration, so to me I was there running it with them. In a less painful way.

This whole experience has frightened me, but I am pleased to say that in the last 2 days, I have felt so good and unafraid, (we'll see how long that lasts.)

That's all for now! 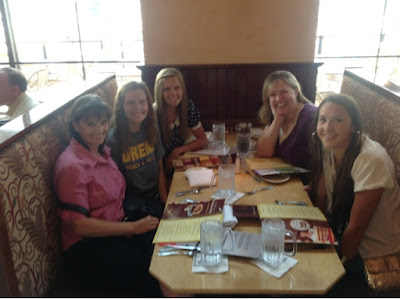 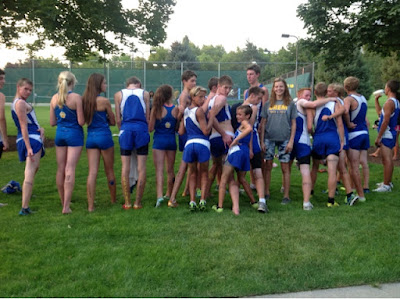 Posted by Rachel Stratton at 5:09 AM