I had chemo yesterday and I have been a little bit nauseated, but I haven't even thrown up yet! Hooray!
This first picture is of me and my patient advocate who I adore, not only because she is 4'10", but because she is a very happy and kind person and her name is Louise. 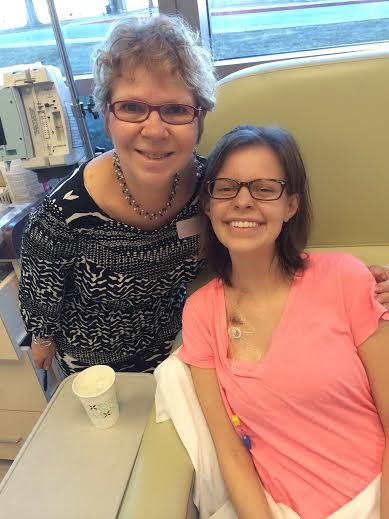 This is my port getting accessed for the first time while I wasn't heavily medicated. Chemo Fridays! 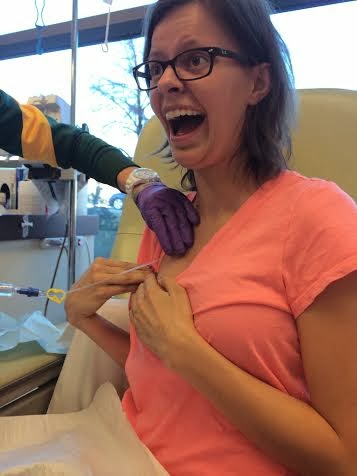 When you are diagnosed with cancer, everybody thinks that is your trial. The truth is, I still have a life and all the drama and disappointments that come along with it. I just have cancer as my cherry on top, and that really puts a delay on life sometimes. I have as many dreams and aspirations as the next person, but I also have been told that I'm not going to make it. There's a semi big frustration, on par with hitting McDonalds at 10:31 AM, one minute after breakfast closes, and being told there's nothing you can do to get your sausage McMuffin and hash brown.
This last week, all of my finger tips went numb on my left hand, and my face is still just as numb. I feel so frustrated and helpless. When I was little I always thought parents, family, bishop, and doctors could solve all of my problems. It's scary to have a problem that nobody can solve, and that not even mommy can kiss better.
Here's another annoying frustration to me (besides the fact that now I am much slower at typing, due to the numbness in my left hand). When people are insensitive. Nothing frustrates me more than a rude, careless, bull headed, insensitive and most likely insecure person.
This last week I was hanging out with my friends at a nearby place and friends had been bailing on me all day long (really not trying to sound like a drama queen, but it's definitely coming across that way). Nothing to me had seemed to be going right. (So Jr. High, right?). Anyways I was frustrated to the point where I left on foot and walked next door to the bowling alley where my brother and his friend happened to be. Also there, was my cousin because it was his birthday, and his friends. So I went and jumped on my cousin to be annoying and joke around like I always do. One of the people from his friend group, that I later found out was just a tag along, started a conversation with me and was being a little vicious.
I don't know exactly how it got out of control, but it did. So I told him "Hey, you can't talk to me like that!" And what was his response? "Why not?" I told him "Because you shouldn't be talking to me like that." and he said "Why not?" (Obviously this is where I pull the cancer card and say....) "Because I have cancer!"

This is where the situation gets almost disturbing, when he replies "Well you're half dead anyways cause you have cancer so it shouldn't matter to you anyways."

I'M HALF DEAD ANYWAYS? What kind of dreadfully awful individual would ever say a thing like that?
I definitely didn't sit there and take it politely, quite contrary actually. But people from my blog seem to think I'm some kind of hero, and I'd like to try and maintain that image.

He has a cancerous attitude and personality, and I felt sorry for myself, while in my bed for about the next 24 hours after that. But I realized, I should feel more sorry for him. I'm more alive than he might ever be. Yeah I have my quirks with people, but I also know how to genuinely appreciate someone, and that's more than he's ever learned in his 30+ years of overeating and bullying. (Uncalled for I know).

Here's the moral to my story. You might not have cancer, but it's easier than you think to catch a cancerous attitude. Learn to appreciate people while you have them, and despite their troubles, trials and worries. You'll never see exactly the same as somebody else, take it from an identical twin. But you can learn to see beauty in the way that others see things, and live their lives, and that's why we're here.

I know I've been complaining a lot recently, but I'm trying to display the raw honesty behind a life with my particular trial. The only way I know how to do it is through words and stories, so here ya go! Thanks for reading, supporting, praying, and commenting. I truly do appreciate it!
I can do hard things!
Rach
Posted by Rachel Stratton at 10:43 PM