Today (June 5th) has already been one emotionally exhausting day. But lets go back about a week and start from there.

During my treatment at St. Jude I went through a phase where I wanted to give up on everything, including treatment and my school. (I'm not always as strong as I seem)! I remember being at the school in the hospital, bawling my eyes out because I couldn't concentrate long enough to put a simple sentence together from my English homework. Anyways my mom reminded me that it was my goal to graduate, and naturally, being the stubborn girl I am, said "I don't want that anymore". Because it was too hard. Well, I graduated! 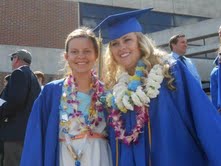 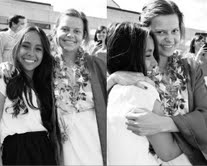 We have a German foreign exchange student friend, and she just left after being here the whole year:(

We miss you Charlotte!

Okay, now for the setback. I went in for a spine MRI yesterday because I've been having pain in the butt (literally) and all down my legs. It's not normal pain either, it's excruciating and limits me to the point that it hurts to sneeze, cough, and even lay in bed.

The MRI did not come back how we had hoped, and it is a really discouraging time for me. I have a mass growing on my L4, L5, and S1 portions of my spine. I am probably going in for surgery tomorrow, which will give me more time to blog! They're going to try and remove as much as they can, but nothing is promising, and I'm having a hard time feeling hopeful.

I don't know if anyone knew this, but I really like twitter! It's such a good and easy way to stay connected. Anyways, last night I was so bugged, so naturally... TWITTER!

I wrote on it and said "I'm sick of having to be the strong one all the time." And it's completely true! I'm so sick of it, sometimes I want to scream! Which I did yesterday, but that's besides the point. The point is, I think I finally reached the point where I was just so fed up that I'm almost angry about it. As soon as I found out yesterday, I was just thinking, this is some sort of sick joke!

People keep telling me I'll have major blessings because of what I'm going through, and all I can say back is "I better!"

I know this is probably bad of me to say, but I never knew when people said "Life is hard" That they were that serious about it being hard and crappy. But on the bright side, I've had so many friends and family texting me, or coming over or calling, telling me how much they love me, and just being there to comfort me. So I really don't have that much complaining to do, in fact, I should probably be repenting, but it's been a tough 10 months!

Anyways, i'm sure I'll be turning to my blog tomorrow after surgery to keep y'all updated. Thanks for your love, and a huge thanks for PRAYERS.

I could use them now more than ever, so feel free to send one my way.

Thanks, and wish me luck!


Posted by Rachel Stratton at 8:47 AM